This is the first lesson of 1917, its highly topical and fecund legacy - strategy party means bringing the consciousness of decisive world facts to our class. This was the case a hundred years ago, in the October assault in Russia. This is the case today, in our battle to entrench a Bloshevik Party in the heart of European imperialism. And it will be the case tomorrow, when the imperialist contention will once again leave no alternatives : either war or revolution, either Socialism or barbarism. Then there is a second lesson. The slogan of the German Spartacists – " The Main Enemy is at Home " – stands out on the first issue of our newspaper. That allusion from the 1914-1918 internationalist battle is a point of reference for today, both in our struggle against the ideologies of the "small" homeland of the nation-state and the new ideology of the "big" homeland of the European continental State. Today the " locomotive of history " that is driving international struggles of the classes and of the States is not yet imperialist war, but it is huge, uneven, economic and political development – it is Asia's rise that is preparing the future breakdown of order, but meanwhile it proceeds in the present amidst increasingly intense crises and partial conflicts. Chinese imperialism is emerging, European imperialism is on the move, the Atlantic powers are declinig and those of the Pacific are gaining a foothold – continent-size forces are fighting each other. Tomorrow revolutionary defeatism will establish the class autonomy of every sector of the world proletariat, in the new assault against every bourgeoisie and every imperialism. For us, today, " the main enemy is at home " means " proletarian opposition to European and unitary imperialism ". This is our slogan. It is the offspring of the October Revolution. 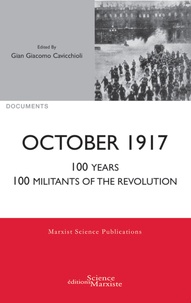 October 25th, 2017 marks the 100th anniversary of the beginning of the October Revolution, when a group of socialist revolutionaries stormed the Winter Palace in Petrograd (today's St Petersburg ...