This book continues the story of Lotta Comunista after the first volume narrating what happened to the original group between 1943 and 1952. In the mid-'5os, as a result of the crisis of Stalinism, GAAP, the Anarchist Groups of Proletarian Action, entered into dialogue with Azione Comunista. The latter was a political grouping of maximalist stamp that initially worked as a pressure group within the PCI. It left the PCI in 1956, the momentous year of the "Khrushchev Report", the Suez crisis and the repression of the workers' uprising in Hungary. Within a few years, from 1955 to 1958, Azione Comunista completed the essential part of its course, especially after the group merged with GAAP into the Movement of the Communist Left iri 1957. The tendency more closely linked to the libertarian tradition at first saw the emergence of PCI dissidence as an opportunity that could substitute proselytism among the anarchists, which had ended in deadlock ; but later it would propose merging the movement with Nenni's PSI. A Milanese maximalist splinter group still remained in the Communist Left, until it fell prey to the Maoist myth shortly afterwards. The majority returned to the PCI or lapsed into passivity. A small group, including Arrigo Cervetto and Lorenzo Parodi, retained their political autonomy and gave birth to Lotta Comunista in 1965. This was the result of a decade of heated battles of a small group to reject the many influences — both national and international — that acted upon Azione Comunista and the more general phenomenon of the crisis of Stalinism in Italy. The other face of the decade was a double victory for both strategic analysis — with the theory of unitary imperialism and the 1957 "Theses" — and party theory — with the book Class Struggles and the Revolutionary Party. This was the crux of the matter — political autonomy based on strategic clarity. In spite of a thousand adversities and some mistakes, continuity with Marx and Lenin's revolutionary science was restored. It would give Leninism a chance to recover in Italy. 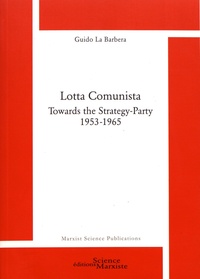